This is a an updated version of the family history I produced in 1988. A lot of information has become available since then, and there have many changes in the family including, sadly, some deaths. A problem with writing family history is that new knowledge is constantly turning up, outdating what is already on record. Any version should be subtitled, ‘As far as is known at this time’!

Since Kinawley parish is the place of origin of this Leonard family, so far as it can be traced, and coincidentally the birthplace of the Kinglass Leonards, I thought it appropriate to begin with a chapter on Kinawley, its location, topography and something of its social history.

The history anchors on the Leonard family of Kinglass, James and Teresa and us, their children, born between 1920 and 1938. It works backwards to our roots in Ireland and forward (in the Appendix) to the shoots, our many descendants. From Terence Leonard, the first recorded ancestor on fathers side, to our grandchildren, it covers seven successive generations of Leonards. On my mothers Cox family side we can trace no further back than her parents and therefore only five generations in all.

Genealogy is a growing industry, especially among Irish Americans. (Irish Australians do not appear to have the same degree of interest.) My feeling is that the pursuit of family history is a search for identity in this increasingly homogenous world  It is also a recognition of our debt to our ancestors, who overcame many adversities so that we might have life and have it more abundantly. To search for their history and record their lives is by way of appreciation for what we owe them — a way of saying Thank You.

We are greatly indebted to Mr Tom McCarthy, of Michigan U.S.A, who unearthed  the new information on the Leonards’ American connection from census records, death certificates, burial records and photographs of the Leonard tombstone in Calvary graveyard, Queens County, New York . Tom is a descendant of the Clancy family of Cnocknacrieve townland, which adjoins Kinglass townland in Co Fermanagh. 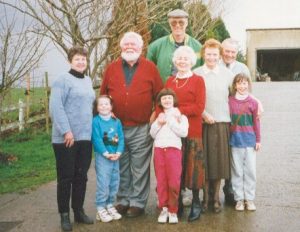 Tom McCarthy himself (the little fellow in green at the back) at Sean Leonard’s home in Fermanagh in 1987, with, from left to right, his wife Gerry, Philip Leonard and wife Rose, Imelda Leonard and husband Sean, and McCarthy grandchildren Hannah, Emma and Nora.

I am indebted to all who helped with the project, to Father Kieran Devlin, for his extensive research on the Mac Giolla Fhinnéin clan, to family connections and friends who also helped, Brendan Leonard, Nora Masterson, Jackie Cox, Bertie Tracey, David McDonald, Fergy Reilly and, not least, my wife Rose and our children.

This website was adapted by Niall Leonard  from the monograph by his father,  Philip Leonard, who passed away in August 2012.

It is no longer updated, but maintained as a memorial to a wise, funny, industrious and loving husband and father, and as a resource for his family and all for all the children of Fermanagh across the world.

The celtic knot that frames the pages came from a clipart site by Howard Oliver.