This chapter is a precis of three files in the Leonard history (not included here) that deal in detail with the Kinglass Leonards kinship connections with the Reilly, Murphy and McManus families of the local area.

The Reilly farm in Drumlish, Kinawley, borders both the ancient Leonard farm in Graffy and the existing Leonard farm in Kinglass. The families were close friends[2] and were connected by marriage in successive generations. The first marriage was between Hugh Leonard, brother of our great-grandfather, Philip (the Thumb) and Rose Reilly of Drumlish on 14 June 1836. Rose’s father was probably Andrew Reilly, listed as a tenant in Drumlish in the 1830s, and she had a brother Terence who succeeded to the family home. Hugh and Rose had three children baptised in Kinawley — Andrew, Margaret and Terry — and evidently another, John, born in Clonursin in Killesher parish.

The brothers Hugh and Philip Leonard acquired the Clonursin farm circa 1845, and divided it between them. At the Griffith Survey c1856 Rose Leonard is listed as the owner of Hugh’s half — Hugh had evidently died. Rose’s daughter Margaret, who succeeded her, married Thomas Maguire. They had no children. After Thomas died in 1930 the farm was acquired by Uncle Patrick Leonard and restored to one unit. It is said that Thomas Maguire was in the RIC (Royal Irish Constabulary) and served in the force with Rose’s brother John but nothing more is known of Rose’s siblings Andrew, Margaret or Terry. Andrew could have been the Andrew Lynnard who stood sponsor for Terence, first son of Philip the Thumb in 1856. John Leonard at an address in Dublin is mentioned in Thomas Maguire’s will as having an interest in the Clonursin farm.

The marriage in the following generation was between Bridget Reilly and Patrick Leonard in New York on 2 April 1888. Bridget was the daughter of Rose’s brother Terence Reilly of Drumlish and Anne Carron of Cnocknacrieve, Kinawley. Patrick was the second son of Philip the thumb of Clonursin. Both had emigrated to New York. Brigid died on 5 March 1889 following the birth of her baby Philip on 28 February. The baby died on 17 March. Patrick died from diabetes on 15 February 1899. They are buried in the Leonard grave in Calvary cemetery, Borough of Queens, New York.

Our friendship with the Murphys of Cnocknacrieve is an example of kinship recognised through three generations. The first Terence Leonard (1778-1870) was succeeded on his home farm in Graffy by his son Terence (brother of our great-grandfather, Philip the Thumb). The younger Terence (1829-1873) married Ellen Leonard. They had at least three children: John, who succeeded to the home farm, born probably c1861, Catherine or Ketty born 1863, and Anne baptised 3 September 1865. (These were first cousins of our grandfather Philip.) Anne was the only one baptised in Kinawley, which indicates that the others were born elsewhere, and that Terence and his family took up residence in the family home with old Terence shortly before Annes birth. Nothing more is known of Anne.

John married a Mary Leonard and had a son Terence born in Graffy 14 August 1895. The family was gone from Graffy at the census in1900 and nothing more is known of them.

Ketty Leonard married Andy (the Cub) Murphy of Cnocknacrieve, Kinawley on 7 March 1886. Cnocknacrieve borders Kinglass townland. Ketty and Andy were close friends of our parents as was their son Andy who succeeded to the home farm. There was a constant interchange of visits and young Andy was a favourite visitor when we were children. Our brother Aidan in Kinglass has kept up the friendship with Andy’s son and successor Patrick Murphy who is his third cousin.

Ketty (Catherine) was the daughter of Terence Leonard (junior) of Graffy (1829-1873) and granddaughter of the Terence senior (1778-1870). Ketty was born in 1863, one of three known children of Terence and Ellen (nee Leonard) of Graffy. They were John, Ketty and Anne. Only Anne was baptised In Kinawley (in 1865), indicating that the family moved from another area about that time to live with old Terence, possibly after his wife died. Kettys father Terence was a brother of our great-grandfather, Philip (the Thumb) and therefore she was a first cousin of our grandfather Philip. She married Andy (the Cub) Murphy in 1886 and lived on his home farm at Cnocknacrieve adjoining our townland of Kinglass. They had eight children. Ellen her mother came to live with them in Cnocknacrieve before she died in 1904.

Ketty was an attractive lady, popular in the locality. She and Andy and their family were close friends of our parents who often visited them in their roadside home in Cnocknacrieve. Her brother John was the last Leonard occupier of the Graffy farm. Circa 1900 it became the property of his close neighbours the Veitch family of Graffy. John and his wife Mary (née Leonard) had a son Terence born in Graffy in 1895. Why they sold the farm and what became of them afterwards we do not know. 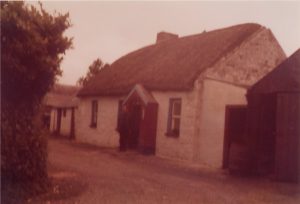 The ancient home of the Leonards of Graffy where Ketty was born. (It may have been reconstructed later.) We Leonards of Kinglass passed by the front door daily on our way to school and chapel in Kinawley. Note the mark of a pre-existing lean-to on the gable. The house is facing north and lay about 100 metres east of the Graffy road. Photo taken 1980 before it fell to ruin.

There was always a close relationship between our family and the family of Aunt Ellie McManus of Derryhowlagh. Mother’s sister Ellie married James McManus of Derryhowlagh, Mackin, known as Pat’s James. James and his many cousins claimed to be descendants of a noted McManus family who, at the Plantation, were driven from their island home of Belle McManus in Upper Lough Erne, now called Belle Isle. It was said that members of this McManus family were involved in the Mackin Fight of 1829 when Catholics waylaid Protestants returning from an Orange celebration in Derrylin and a Protestant was killed. Some McManus men fled to the Glangevlin area in Co Cavan, but one, Ignatius McManus was arrested and with nine others was sentenced to death. The Lord Lieutenant commuted the sentences but unfortunately Ignatius was hanged before the messenger arrived from Dublin. Another connection of this McManus family was the famous Terence Bellew McManus sentenced to death for his part in the Young Irelanders rising of 1848. The sentence was later commuted to exile in Van Diemens Land. Terence was buried in San Francisco but was exhumed by the Fenians and re-interred in Glasnevin, Dublin

Our great-grandmother Jane McManus (wife of Philip the thumb) was of the same family as Pat’s James. Our father acknowledged the relationship and referred to Pat’s James as a distant cousin. The actual connection has not been established. James’s father Pat was born in 1832, Jane in 1825. They could have been brother and sister in Pat’s Derryhowlagh home. However our father once mentioned that Jane came from Sessiagh townland adjacent to Derryhowlagh where, until recently there was a McManus family connected to the Derryhowlagh family. Jane and Pat could have been, not brother and sister, but first cousins, making Pat’s James and our grandfather Philip second cousins. The children of James and aunt Ellie were our close friends and playmates as we grew up in Kinglass. We knew them as first cousins through aunt Ellie. Our father’s relationship to James was not an issue that concerned us.

The are also two files, The Australian Connection and The American Connection the contents of which are substantially covered by the chapter The Clonursin Leonards — the children of Philip the Thumb. Four of them, Catherine, Terence, Patrick and John, went to America and two, Philip (our grandfather) and Hugh , to Australia. They appear to have left home separately, Catherine at 18 and Philip, the oldest when leaving, at 26. The evidence is that their mother Jane McManus, who died in 1890, never saw any of them again. Terence returned sometime after the 1900 census in New York to live with his wife, Catherine McConville, in her home place near Annaghmore in Co Armagh and is buried there. Philip our grandfather returned in 1893 or 1894  to the home farm.in Clonursin, Co Fermanagh. He died in 1909 and is buried in the Leonard plot in Kinawley old graveyard. The others died in exile.

[1] The proper name is O’Reilly but was popularly shortened to Reilly throughout these generations, which is why I use it here. In recent times the O’Reilly form is commonly restored especially in formal address.

[2] The friendship between the families survived in spite of an unfortunate disagreement and standoff of many years between Paddy Reilly and our father James Leonard.